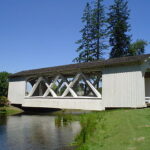 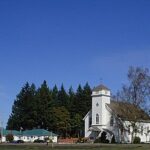 Stayton is a city in Marion County, Oregon, located 12 miles southeast of the state capital, Salem, on Oregon Route 22. It is south of Sublimity and east of Aumsville. Located on the North Santiam River, Stayton is a regional agricultural and light manufacturing center. The population was 7,644 at the 2010 census. Established in 1872, it was incorporated in 1891. Stayton is part of the Salem Metropolitan Statistical Area.

Stayton was founded by Drury Smith Stayton, who purchased the townsite in 1866 and built a carding mill and sawmill on a watercourse of the North Santiam River. In 1872, he platted the townsite, and that same year the community received a post office.[6] A ferry crossing of the Santiam River operated from 1876 until a bridge was constructed in 1888. By 1880, laundry had been established by Kee Sing and Tom. The first newspaper, The Stayton Sun, was published in 1889 by T. H. McGill.[7][8]

The founder of Stayton, Drury Stayton, originally wanted to name the city after his daughter, Florence Stayton. After his petition was denied by the post office because another city in Oregon was named Florence, he chose Stayton and named a street after his daughter.[9] The city was incorporated as the Town of Stayton in 1891 after a failed attempt in 1884.[6]

Seep monkeyflower (Mimulus guttatus) is among the species protected in Kingston Prairie Preserve near Stayton.

Stayton experiences a temperate climate that is usually described as oceanic with mild, damp winters and relatively dry, warm summers, like most of the Pacific Northwest.

Summers in Stayton are warm and relatively sunny but can, on occasion, be wet. The warmest month is August with a daytime average of 80.8 °F (27.1 °C) and an average low of 51 °F (10.6 °C). Because of its inland location, Stayton can experience heat waves, in July and August particularly, with air temperatures sometimes rising over 90 °F (32 °C).

Winters are described as somewhat mild and very wet. Cold snaps can occur and last for several days, and snowfall occurs a few times throughout the winter season; the city has been known to see major snow and ice storms. Spring can bring rather unpredictable weather, resulting from brief warm spells to thunderstorms rolling off the Cascade Range.

The lowest temperature ever recorded in Stayton was −7 °F (−22 °C), on December 8, 1972. According to the Köppen Climate Classification system, Stayton has a warm-summer Mediterranean climate, abbreviated “Csb” on climate maps. 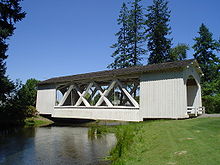 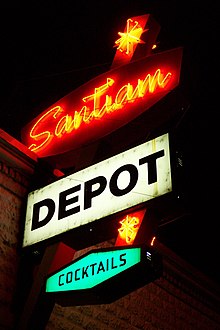 The Santiam Depot, a restaurant

Santiam Hospital is the lone hospital in the city. The only state highway is Route 22, which is located on the north side of Stayton, separating it from Sublimity.

Local attractions include Pioneer Park with the Stayton–Jordan Bridge, a covered bridge.[13] A copy of the Jordan Bridge that spanned Thomas Creek east of Scio, it was moved to the park in 1988. Destroyed by fire in 1994, it was rebuilt and painted white. It is used for social occasions such as weddings. Kingston Prairie Preserve, 3 miles (5 km) southeast of Stayton, protects a remnant of the native prairie that was once common in the central Willamette Valley.[14][15] Silver Falls State Park is northeast of Stayton; it is the largest state park in Oregon and a major tourist destination in the region, popular for its camping, and for its waterfalls.

In 2014, The Band Perry filmed part of their music video, Chainsaw at the Bottle Factory in Stayton.

Bob Zawaski G.R.I. I take a truly consultative approach to working with my clients to ensure satisfaction. I start by defining your needs and objectives. Whether you are looking for your first home or looking for an investment that will give … END_OF_DOCUMENT_TOKEN_TO_BE_REPLACED

My father recently passed away suddenly and left us his 65 year old home. We didn’t know where to begin. Bob Zawaski was highly recommended and now we know why. He looked at the house and suggested a sales price. In addition told us what we would need to do to get the house ready for sale. Frankly, we were going to spend extra money which would not have increased the sales value. We calculate that Bob saved us more than $5,000. We followed his list as you would follow a recipe. The result was that the house was sold for more than we had imagined and it was sold in one day! We would highly recommend Bob to anyone without hesitation!