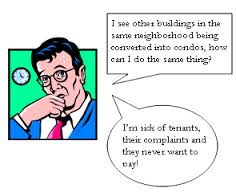 When one thinks of the term conversion as it’s used in Real Estate, one of the first thoughts that may come to mind is that of converting multifamily apartments to condos.  As prices continued to appreciate during the years prior to 2007, there were numerous conversions that yielded far better returns ‘by the piece’ then as a ‘whole part’.  When values soon thereafter began their rapid downward descent many of those property owners were faced with making mortgage payments on a property whose value was far less than what they now owed and/or paying monthly Homeowners Association dues. The combination of weakened buyers coupled with fractured Associations is just one of several components that have contributed to home ownership being at it’s lowest level since 1995. As a result of decreased home ownership (64.8% in 2014) the rental market has seen increased rents throughout most of it’s segments.  In the Portland, OR metro area rents have increased by 5% in the last 6 months with Downtown rents typically going for $1.82 per sq. ft. & NW Portland rents spiking to $1.61 per sq. ft..

The overall market is certainly stable & it appears that we’ve been out of that downward spiral long enough that we can now look to the future with some degree of confidence. In most areas, we’ve made it back from the ‘bottom of the market’ but, depending upon location the gain may be very slight. It would be easy to simply suggest that location has most everything to do with the recovery or lack there of…after all Real Estate is all about location.  Some of the causes & fixes to those issues still linger and can either hinder or help investors in the current market. It’s some of the residual effects of that down market that we can reflect on to examine strategy going forward & incorporate some ideas that may have been ‘shelved’ along the way.

Although not a new concept by any means the conversion of a Condo Association back to rental apartments & potentially being marketed as such has never went entirely off the landscape. Frankly, in addition to such conversions being done for a very long time it wasn’t until I had the opportunity to weigh the needs of two entirely different clients that I decided to investigate not only why certain market factors effected values but, how & when it might be appropriate to think slightly contrary to what the market is doing. The client who initially inquired about values within his small condo complex being somewhat lower than similar neighboring complexes understood that having lost FHA certification when the ‘do over’ button was hit and everyone had to re-apply & subsequently not being able to qualify again was a factor, as was a self imposed limitation placed on selling to investors. With values still slightly below 2007 levels this client has purchased a 2nd unit with an eye towards slow & steady appreciation, as well as the possibility of gaining enough control in the Association with future purchases that might allow changes that will make the units more marketable, such as allowing a limited number of rentals. Certainly a long term outlook at what appears to be the ‘bottom’ of the market for this complex seems to be a good strategy. In the event this clients goals are met in regards to owning a majority of units and making positive changes I wondered how that picture might look if this particular complex were converted to a Multifamily rental property under his ownership. Of course, by the time he might own enough units the market could have an entirely different landscape then it has now but, I couldn’t help wondering how my Multifamily buyers, who are experiencing a severe shortage of inventory, might view this property today & how that use compares to it’s present use.

Obviously it’s not a simple task to dissolve an Association nor should it be done without the guidance of an Attorney & C.P.A., both with HOA experience. Having an understanding of By-Laws and how to navigate the process smoothly, especially dealing with remaining owners, is something that should be taken into consideration long before the situation presents itself…again something your Attorney can guide you with. Disbursal of Reserve funds and all the detailed accounting, including compliance with I.R.S. regulations are issues best left to your C.P.A.  Like most other financial ventures you should be long on both education & the execution of those ideas, it’s my goal to act as a resource for my clients and give them a foundation upon which to carry forward their own investment strategy.  As I mentioned previously, it’s difficult to tell what the market may look like several years from now but, there has always been room for successful investments in up or down markets.

Having the resources of seasoned professionals at the ready, in addition to over 20 years assisting investors exceed their financial goals are just a few reasons to contact me today !

As my Seller and I near the long awaited closing of his 11-unit apartment complex in the NE section of Portland, OR it was not without a few major obstacles along the way. Despite 20 + years of assisting buyer’s & seller’s with similar commercial transactions no two have been exactly the same thus, this was no different in that respect. Many of the commonplace issues were still there i.e., inspections & appraisals etc. however, changes to our market, while exciting for the future, are not without a few pitfalls that  Real Estate Investors should take into account.

Find the strategy first then the property, not the other way around. Sounds simple enough but a sizable percentage of potential buyer’s who inquired about this property were working backwards in that they liked the potential that existed but, weren’t certain about a strategy that would help them reach whatever their goals might be. Unlike purchasing a home in which to live in with your Family where your emotions may set the stage for a transaction, an investment property requires an investment strategy…all together different from viewing it simply as a transaction.

Understand the process first, don’t let the process control you. Education is the key as it’s human nature for many who have been successful in their professional lives to believe that what worked in the past will translate into successfully purchasing & owning investment property. Although there are exceptions to every rule, allowing yourself to ‘skip’ a few steps up front and playing catch up later on can result in an irreversible set back. One of our potential buyer’s, although well qualified from an asset & income standpoint, didn’t grasp the concept that their being ‘first time investors’ would not be looked upon favorably as it would in the residential world. Again, simply carrying over what they knew of residential transactions didn’t bode well where an investment strategy was required.

Exercising due diligence, not ducking it. The most obvious are issues that are easiest to see such as deferred maintenance. Needless to say, the lender is concerned about a buyer potentially draining their personal savings due to extensive repairs thus, funds in reserve are a critical component to obtaining financing & can vary widely based upon the buyer and condition of the property. What things to consider knowing about as a part of the due diligence before & during a purchase may come from a checklist your trusted Broker uses however, nobody knows your financial situation as well as you do. A visit to your C.P.A., lender & perhaps someone who is an experienced investment property owner will serve you well in creating a list of issues important to you. Again, this falls back on educating yourself in advance. It’s always a good idea to ‘bring something to the table’ before meeting with any professional assisting you as it’s unlikely they will be able to lay out every scenario that may present itself in the process.

Even the Lone Ranger had Tonto. Amazingly enough, many potential buyer’s I spoke with over the term of this listing were not simply unrepresented in regards to having a buyer’s Broker working on their behalf but, had little or no ancillary support to fall back on in the way of contractors, inspectors or other legal specialists. Just as in the case of conducting thorough due diligence, it’s always wise to have all the pieces in place before you actually need them.

Get rich quick, misjudging cash flow. Although the multiple listing sheet available to the the public & Broker’s allows for a considerable amount of information to be shared, it’s never meant to cover all the pertinent information that will be essential to a buyer of investment property. Amazingly enough, the lack of due diligence in asking for information up front was not limited to just buyer’s calling on their own but, seasoned Broker’s as well. There were several instances of offers written without any information gathering prior to simply sending an offer along, only to find out that a simple up front question would have avoided the extra effort. If simply left to whatever financial information can be squeezed onto a multiple listing sheet or anyplace you choose to look on the web, chances are you would still be a far cry from being able to make an informed decision. Taking only some financial information without the remaining pieces to the puzzle is short sighted to say the least and a recipe for those looking to get rich quick to become cash flow poor in a hurry.

Bob Zawaski P.C. G.R.I., S.R.S., A.B.R., S.F.R.,  e-Pro I take a truly consultative approach to working with my clients to ensure satisfaction. I start by defining your needs and objectives. Whether you are looking for your first home or … END_OF_DOCUMENT_TOKEN_TO_BE_REPLACED

I have worked with and recommended Bob Zawaski many, many times over the last 20+ years. His unfailing commitment to excellence for his buyers and sellers and years of experience stand out clearly from other agents. He has prompt and clear communication and strong negotiating skills. He truly cares about his clients, and I am happy to recommend him to anyone thinking of buying or selling a home.